StopCovid : Ultrasounds to be used on the app

Accueil » StopCovid : Ultrasounds to be used on the app
Previous Next

StopCovid : Ultrasounds to be used on the app 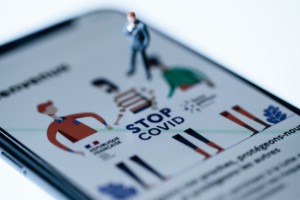 The first version of StopCovid went operational on June 2nd, yet an updated one seems to be coming up some time soon, this time using ultrasounds!

If you have already downloaded StopCovid, you will be aware that the app uses your phone’s Bluetooth service. Yet, this technology is not infallible as ultrasounds can mitigate the Bluetooth’s shortcoming.

With the intention to better the functioning of StopCovid, CopSonic will be cooperating to the project of a forthcoming upgraded version. The Journal du Net (JDN) described CopSonic as being “specialised in secured data transmission through ultrasounds via electronic devices.”

Ultrasounds in addition to Bluetooth

The Bluetooth will not be going anywhere, for the upcoming version will be an expansion of the first one. Emmanuel Ruiz, Founder and CEO of CopSonic stated endorsed technology hybridisation. “Ultrasounds will enable the recognition of the people paths were crossed with better precision than the Bluethooth, avoiding false positives by, for instance, preventing the App’s bluethooth from detecting people though walls.”

Not only in France but on an international stage

The latest version seems promising as other countries have already expressed their interest in the latter. “Other European governments show an interest in our solution as they look into similar means to fight the proliferation of the virus”.

Until now, no release date has been announced. JDN communicated there were ongoing tests and experiments, but we will have to wait for more information.

But you can confide in our labs to keep you updated !