Practicing ultrasounds without being in physical contact with the patient

Practicing ultrasounds without being in physical contact with the patient 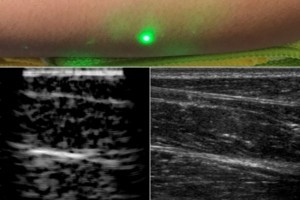 Ultrasounds are recognized for being an unintrusive medical technique, which is why it is practiced for
pregnancy related ultrasounds. Yet, simply being in direct touch with gel and a probe can feel as an
aggressive experience to some patients, such as young children and serious burn victims.
Today, PRS FRANCE sheds light on a new form of ultrasounds aiming to address the matter.

A team of researchers from the Massachusetts Institute of Technology recently developed a way out
that could revolutionize the medical imaging field: laser technology. The aim would be exploring the
insides of the human body without requiring physical touch between the patient and the probe nor
using gel.

How does it work?

The research study was published in December 2019 on the campus’ website.
The new technique consists in using two lasers; the first one is pulsed, sending ultrasounds through
the skin which then bounce back on soft tissues. On the other hand, the second one continuously
sends ultrasounds with frequency variations.

Our first glance at a laser ultrasound image

As shown below, the image is nothing less than the first shot captured by the laser ultrasound!
The image shows two ultrasounds of a forearm: one was done with the new technique (left side shot)
and the other with a probe (right side shot).
Positioned at a 50cm distance from the patient, the lasers enabled sight up to 6 cm underneath the
skin.

A revolution on its way

There is still a long way to go for this new technology to be applied, as a better distinction of the
tissues and a deeper sight through the skin will be required to improve the latter. Yet, we believe a
revolutionary concept is clearly on its way and it is worth keeping an eye on.