Accueil » Cardiology during pregnancy
Previous Next 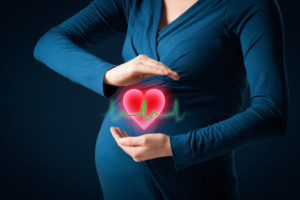 During pregnancy, an expecting woman is about to go through quite a few physiological changes. Even if most of the time everything goes smoothly, there can be several cardiac risks for the mother-to-be. What are they ? Why do they occur ? Our laboratory, leader in the repair of TEE probes, tells you everything you need to know on this topic.

Pregnancy is such an upheaval for a human body that sometimes, it cannot keep up. There are numerous pathologies that occur during pregnancy, all very different from one another. Gestational diabetes for example is one of them. However, as we look only at heart diseases, the list is still quite long :

Why is the heart so at risk?

Even if this list of heart diseases might seem long, expecting women shouldn’t be afraid. The real question that we, at our  laboratory, leader in the repair of TEE probes, ask is: why is the heart so at risk?

The answer lies within the patients’ age. As a matter of fact, women tend to have children later in life. Hence, chronic diseases such as diabetes, overweight and hypertension are much more common.

How can those risks be minimized?

According to the Professor Laxmi S. Mehta, who has conducted a study on pregnant woman’s cardiology, “preconception counseling by the multidisciplinary cardio-obstetrics team is essential for women with preexistent cardiac conditions or history of preeclampsia.”

Risks must then be considered before the conception in order to be under control during the pregnancy, but Professor Laxmi S. Mehta adds that the risks do not disappear right after childbirth. “Early involvement of the cardio-obstetrics team is critical to prevent maternal morbidity and mortality during the length of the pregnancy and 1 year postpartum.”

Cardiovascular disease is the leading cause of pregnancy-related mortality in the United States. In France, it is the third cause, right after haemorrhages and strokes.